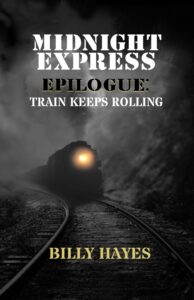 Billy Hayes was a college English major searching for adventure to write about, like his hero Jack London, when in 1970 he had a rude awakening–he was arrested at the Istanbul airport trying to board a plane while carrying four pounds of hashish.  After receiving a life sentence, relentless efforts by his family to gain his release, enduring five brutal years and making numerous escape plans, Billy took matters into his own hands and pulled off a daring escape to freedom. Soon after, he wrote his first book, Midnight Express, a worldwide best seller that became an Academy Award-winning film.

MIDNIGHT EXPRESS EPILOGUE: TRAIN KEEPS ROLLING shares Billy Hayes’s continued journey of self-discovery as an actor and director, a husband, and a son of aging parents. He fulfills a longtime dream of rapprochement with the Turkish people when he accepts an invitation to speak in Istanbul, also revisiting his former prison and the now abandoned madhouse he had tried to escape from in 1972.  He writes and performs a one man show, Riding the Midnight Express with Billy Hayes, where he’s able to tell his story in his own words, and in his favorite medium–theater–in New York City, London, Edinburgh, and beyond. When the documentary that filmed his return to Istanbul, Midnight Return: The Story of Billy Hayes and Turkey, screens at the 2016 Cannes Film Festival, Billy and his wife Wendy return to where they first met in 1978 at his film’s world premiere. Through it all, his marriage both challenges and sustains him. Includes photos.

“You would think Billy’s famous escape from the Turkish prison was harrowing stuff but his life that follows is just as exciting. His writing, etched with detail, well known personalities and big decisions, colors a world of celebrity and consequence… you are with him all the way from page one to the end.”  – Richard Vetere, author, The Writer’s Afterlife

“Billy’s life after Turkish prison and then returning to Turkey decades later, is a wonderful testament to finding inner peace and achieving balance—through reflection, empathy, and forgiveness.”  – Nolan Dalla, author, One of a Kind

“Some books open doors, and some books become the doors through which we pass into other, stranger worlds of experience and understanding.  Midnight Express is such a book: a door that opens into love and fear, courage and sorrow so profound that the experience of it is quite simply unforgettable.”  – Gregory David Roberts, author, Shantaram

MIDNIGHT EXPRESS tells the gut-wrenching true story of a young man’s incarceration and escape from a Turkish prison. A classic story of survival and human endurance, told with humor, honesty, and heart, it became the Academy Award-winning blockbuster film of the same name. In 1970 Billy Hayes was an English major who left college in search of adventures to write about, like his hero Jack London. He had a rude awakening when he was arrested at the airport in Istanbul trying to board a plane while carrying four pounds of hashish, and given a life sentence. After five brutal years, relentless efforts by his family to gain his release, and endless escape plotting, Hayes finally took matters into his own hands. On a dark night, in a wailing storm he began a desperate and daring escape to freedom…

This is the astounding journey, told in Billy Hayes’s own words, of those five years of living hell and of the harrowing ordeal of his time on the run.

“Some books open doors, and some books become the doors through which we pass into other, stranger worlds of experience and understanding.Midnight Express, by Billy Hayes, is such a book: a door that opens into love and fear, courage and sorrow so profound that the experience of it is quite simply unforgettable.” – Gregory David Roberts, Author of Shantaram

THE MIDNIGHT EXPRESS LETTERS: From a Turkish Prison 1970-1975 is a compelling collection of letters that Billy Hayes wrote to his family, girlfriend, and friends during his years in a Turkish prison. Here is the raw source material from which Midnight Express—the worldwide best-selling book and Academy Award-winning film–is drawn. Together with annotation, photos, and images of the handwritten pages, these letters tell Billy’s story of both the events and the inner journey, in his original words, with the urgency and intimacy of the moment.

“Letters  lays bare the raw emotions of the moment, of many moments, of five years incarcerated. While Midnight Express is a brilliant memoir with a perfect story arc, an impossibly resilient hero, and an exciting climax, Letters From a Turkish Prison reveals what is between the lines. Taken together, the two books show us the entirety of Hayes’s experience.”
– Goodreads Reader

“Poetic and lyrical…a fascinating read and a close look at the endurance of the human heart.” – Amazon Reader

“Letters  is unforgettable and Hayes is to be thanked for sharing them with us. Do not miss reading this spirit-baring epistle.”
– Amazon Reader

“This book of love, humility, pain, fear, tenderness, and the will to survive and SOOO MUCH MORE, will leave a lasting impression in your soul.” – Amazon Reader

MIDNIGHT RETURN: Escaping Midnight Express picks up where Midnight Express left off. Billy Hayes leapt from prison isolation to international notoriety when the book about his five years in and escape from a Turkish prison became a worldwide bestseller, and an Academy Award-winning film. Midnight Return chronicles his struggles and triumphs in that transition, tracing Billy’s journey from desperation to freedom, and even true love. It revisits his daring escape in more detail, and weaves in the harrowing story of his friend who remained behind and Billy’s efforts to help free him. We take the ride with Billy as he sometimes stumbles along a path toward healing, self-knowledge, and a new life incorporating his hardest won lessons–to a place where he can say that being arrested and sentenced to life in prison was both the worst and the best thing that ever happened to him.

“This book flowed through the horrific and spiritually uplifting details of a tortured soul literally gambling his life seeking freedom, as though it was rocket propelled. I couldn’t put it down. It skillfully paints vivid pictures with every chapter. So well constructed, it seemed to anticipate my every question and answered all of them in the seamless roaring flow of emotions it created.” – Amazon Reader

“If you liked Midnight Express – you’ll love this book. It shows that his ‘against all odds’ escape was not just down to luck, but his constant drive to move his life forward is down to his grit and determination and inner strength.” – Amazon Reader